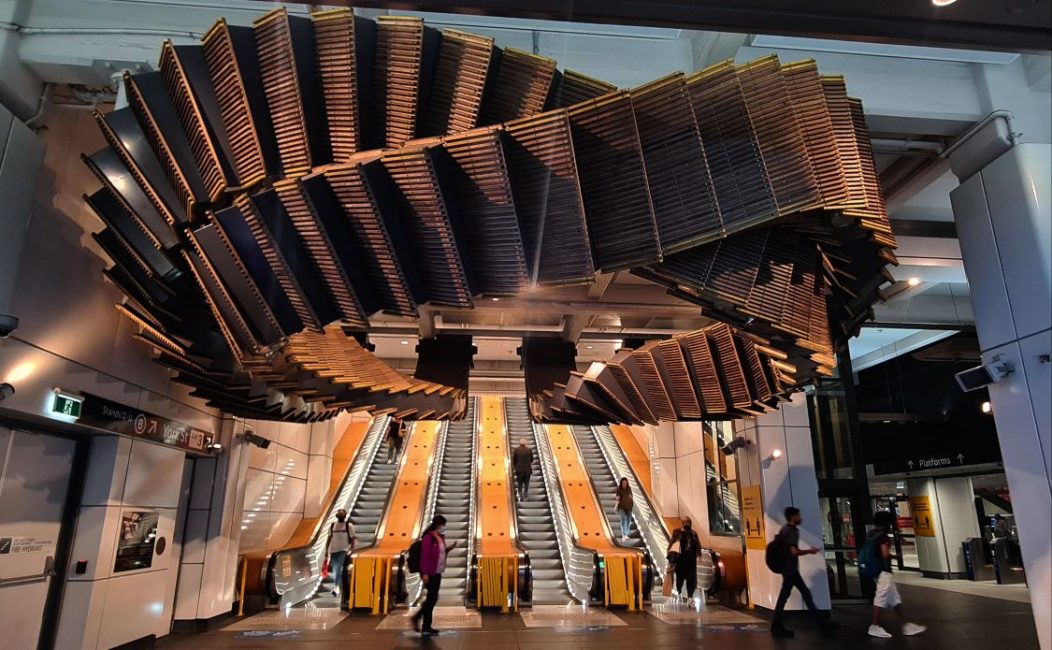 This inner Sydney sculpture walk will keep you busy for a few hours! The Hunt begins and ends with my favorite sculptures: Dual Nature and Lamp for Mary. I promise you that you will be blown away by some of these sculptures – they invoke memories and emotions and I found the extent to which some of these sculptures do that quite astonishing. And each time I track down another sculpture I catch glimpses of what is possibly the world’s most beautiful harbour.

Don’t just be a tourist in Sydney. Get to know this large and spreading metropolis like locals do – taking shortcuts and wandering down alleyways, passages, and along with quiet parts of the harbour shoreline.

By the end of this sculpture hunt, you will understand:

Many of these artworks can be found along the Sydney Harbour Foreshore walk or in the inner suburb of Surry Hills.

Just down from the Andrew (Boy) Charlton Pool on the edge of the Royal Botanical Gardens is the enigmatic “sound sculpture” known as Dual Nature.

Constructed by artist Nigel Helyer, Dual Nature features a number of conical steel objects, long since turned to rust, some of which sit on the rock shelf while others are partially submerged. The two partially submerged cones are attached via cable to stainless steel cranes and act as reverberation chambers, the specific sounds of which change with the tides of Woolloomooloo Bay.

Hidden within the cones on land is a series of solar-powered audio devices that play a soundscape, carefully arranged to construct a historical narrative of the area. This soundscape, combined with the industrial quality of the sculptures is designed to create a holistic and almost living monument to the area’s maritime history.

2. Almost Once – aka The Big Matchsticks

Directly behind the Art Gallery of New South Wales is Almost Once. A pair of matches eight meters high, one fresh and one burned, this piece was made in 1991 by the famous Brett Whiteley and his assistant Matthew Dillon.

Suggesting questions of time and mortality, Almost Once reminds us (in its own whimsical style) that our time on earth is limited. While we might start out as the fresher match, we’ll surely end up burnt in the end.

Almost Once made news back in 2007 for unlikely reasons. A local flock of cockatoos had taken a shine to the sculpture’s blackbutt timber, prompting criticism of the Art Gallery of New South Wales’ maintenance routine.

Despite this, it still holds pride of place outside the gallery and remains one of Whiteley’s most well-known sculptures, remarked upon by throngs of visitors every year.

Ok, I know this just looks like a fountain but it’s much more! A set of three bronze bowls emerging from the paving of Martin Place, Passage by Anne Graham is arranged along with the stylized blueprint of a Georgian-era house.

The outline of the building is marked by metal grilles, emitting a ghostly mist that conjures the walls of the ancient house. In this sense, the sculpture pays homage to the rich architectural heritage of the area, which is one of the oldest parts of the colonial city.

The water that bubbles from fountains within the bowls and down into the reflection pools below specifically references the washbasins of the colonial era. Together with the mist, the water symbolizes the lifeblood of the city as a living organism.

Passage was commissioned for the Sydney Sculpture Walk, planned to open for the 2000 Sydney Olympics and the Centenary of Federation the year after. They’ve since become a notable part of one of the busiest parts of the city.

As you approach the famous Angel Place Recital Hall you’ll notice a strange flock of fifty empty birdcages, suspended in the air. This is Forgotten Song, and from these cages come the calls of fifty species of bird that once lived where the city of Sydney now stands.

The soundscape was carefully researched by artist Michael Thomas Hill and his team as part of the Laneway Temporary Arts program and was designed as faithful as possible to the ancient landscape.

As the sun sets, for instance, the distinct calls of the whip bird, the excited chortles of lorikeets and even the eclectic mimicry of the lyrebird subside and those of their nocturnal cousins: boobooks, frogmouths, and nightjars begin.

This beautiful and at times eerie installation evokes a time before European colonization and the rapid and ongoing urbanization of the Sydney basin. A place that’s lost forever but, thanks to these little monuments, will in part live on. Forgotten Song has become a favorite part of the city for Sydneysiders and you will always find people wandering down this little alleyway to hear the city’s Forgotten Songs.

When the historic inner city railway station at Wynyard was renovated in 2017, artist Chris Fox jumped at the chance to reuse and remix some of what was going to be replaced, to splice the old station’s heritage into the newly redesigned exterior you’ll see today.

Look up at the new escalators at the York Street exit and you’ll see Interloop. Taking the old Otis escalator treads first installed in 1931, Fox has refashioned them into an exquisite twisting mechanical creature, one that reminds commuters below of an accordion made into a Moebius strip. Fifty meters long, weighing five tonnes and comprising over 200 individual treads, Interloop took six months to finish.

And if public feedback is to be believed this time and labor is well spent. A symbol of Sydney’s pride for its storied past and hope for a gleaming future, Interloop is a fitting end to eighty years of work for Wynyard’s old and faithful escalators.

6. The Distance of My Heart

When you next walk along Bridge and Grosvenor Streets down to Macquarie Place Park, pay attention. Perched upon the awnings and facades of the city’s artificial canopy are some equally artificial birds. These sixty little bronze birds make up the Distance of Your Heart, a collection of sculptures designed by British artist Tracey Emin.

While Sydney might be filled with great monuments, Emin wanted to make something that was in a sense the opposite; something simple, unobtrusive, and accessible to those that use the city. While most statues are statuesque, these sculptures are simply the size of the birds that they seek to represent.

According to Emin, the birds are almost meant to symbolize Australia’s particular loneliness, the distance from the rest of the world. And it’s for this reason that the pieces are geographically located around the site of famous convict architect Francis Greenway’s Obelisk of Distance, an artifact used to measure out some of colonial Sydney’s first roads.

I can’t tell you how long it took me to find these birds. Once you’ve found a few, however, you begin to see them everywhere!

7. Still Life with Stone and Car

Driving through Dawes Point, you might well reach the roundabout where Pottinger Street meets Hickson Road. And here you’ll find what looks like the aftermath of a very unlikely accident. A 1999 Ford Festiva hatchback was crushed by a two-tonne boulder with a face painted on its side.

Luckily this spectacle was not an accident but one made by design, specifically the design of American artist Jimmie Durham. Made for the 2004 Biennale of Sydney, this street sculpture was originally an installation set up in front of the Sydney Opera House.

Watched on by curious crowds, it was here that Durham carefully painted the rock before suspending it via crane and dropping it onto the unfortunate car.

A whimsical take on life, death, and finality, the artist tells us that it’s concerned with “nature; that implacable hard stuff.”

As with the walk down to Barangaroo to see Still Life with Stone and Car, Pyrmont and Ultimo are inner-city harbour suburbs that have been entirely gentrified in the past 20 years.

Pyrmont now has wharves converted into loft apartments with enormous boats docked alongside. And it is in this waterfront area you will find the next sculpture.

Tied to Tide is just as its name suggests. This two-decade-long moving installation on the pier at Pirrama Park in Pyrmont has been designed by Australian sculptors Jennifer Turpin and Michaelie Crawford to mirror the state of flux that animates the natural world. Constructed from steel, timber, fiberglass, and aluminum, Tied to Tide comprises eight identical elements, each a red ladder attached by its end to a wooden beam, components that respond to the winds and the tides respectively.

While the elements are all but submerged during high tide, at low tide, they sit high above the watermark, while all the while the ladders sway and turn with the whims of the wind.

The artists designed this piece “to play with, rather than stand against, nature” and it provides an inventive juxtaposition of engineering and the environment that captures the natural rhythms of the Harbour City.

Each night, commuters driving home underneath one particular stretch of the Western Distributor are greeted with a very curious sight. A little copse of golden glowing trees that seem to hold in place the highway above.

Commissioned by the Life Under the Freeway Project, Aspire was constructed in 2010 by Sydney artist Warren Langley from high-density polyethylene, the glow of which changes to suit lighting conditions and maintain commuter safety.

Aspire references a local community campaign at Fig Street, which saw neighbors band together to stop the demolition of their houses in the face of one of Sydney’s frequent urban renewal and infrastructure projects.

The artist represented not only this part of Sydney’s history through wordplay, but hoped to symbolize the aspiration in the locals’ collective action. These figs are rooted in the soil, but they still shine and still reach up to support the needs of a growing city.

The walk down Kimber Lane in Sydney’s Chinatown is a walk into Sydney artist Jason Wing’s In Between Two Worlds.

Commissioned as part of the Chinatown Public Art program, this piece is a mix of blue wall and floor murals in the style of cloud, and silver figurines that glow blue in the night, installed in 2013, and has delighted visitors ever since. Wing is an artist of both Aboriginal and Chinese heritage, and these dual parts of his identity have informed the construction of In Between Two Worlds.

Incorporating the four elements of the Chinese Zodiac and invoking both Chinese and Aboriginal beliefs in his design of the spirits, In Between Two Worlds is a brilliant cross-cultural exploration, set in one of Sydney’s oldest cross-cultural locations.

Another piece of laneway art, Village Voices is located in a little laneway between Crown and Wiltshire Streets in Surry Hills.

Looking a lot like the changeable signs you see outside churches and schools, Village Voices communicates a variety of stories, poems, and prose from the local community in big block white letters. Six lines long, these texts are taken from a drop box in the Surry Hills Community Centre, where anyone can make a submission anonymously.

Village Voices’ creator, Astra Howard, set up the piece as a way to give a public voice to people living on the margins and is meant to stimulate conversation and debate about issues that affect the local community. In that sense, Village Voices goes beyond aesthetics, serving as one small part of Sydney’s democracy.

Australian Anthropologist, Mick Taussig has written the epitaph on the wall of the building beside Lamp for Mary. In what is now a gentrified part of the city, his simple but powerful words make my heartache for the woman who lost her life here.

This is a lane with a name and a lamp in memory of the woman who survived being beaten and raped here. She happened to be lesbian. When the sun sets, this lamp keeps vigil along with you who read this in silent meditation.

A wonderful spot to understand how inner Sydney’s dark underbelly is slowly being erased.