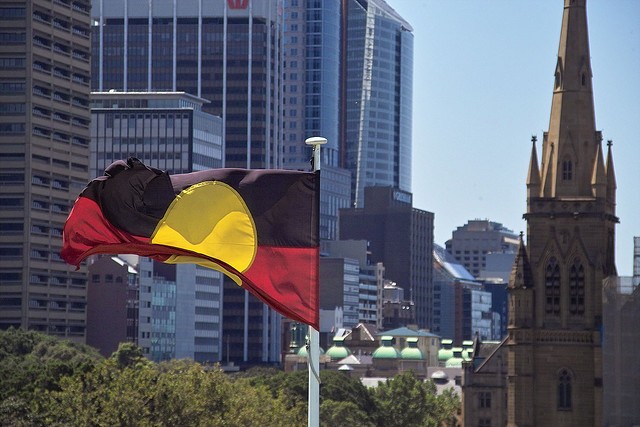 You don’t have to wait till you get to the outback to begin learning about Australian Indigenous culture.  Sydney has several sites that will give you the opportunity to learn more about Australia’s Aboriginal heritage and the First Nations People of Sydney Harbour.

Before we begin, let’s get some background.

The jury is still out on the exact date, but current science suggests that Australia’s indigenous people have been living on this continent for at least 60,000 years. Many Aboriginal people consider themselves as being part of these lands since time immemorial. And so, like the rest of Australia, no trip to the Harbour City is complete without an understanding of Sydney’s living Aboriginal history, and an active exploration of that history as it exists today.

What Aboriginal land is Sydney on?

Before the arrival of the British, Sydney was home to anywhere from 4,000 to 8,000 indigenous people, probably organised into 29 separate clan groups. Standing above these clan groups were three great language groups, the Dharug, Kuringgai and Dharawal. The British came to refer to these people as the Eora, from a local word meaning “here” or “from this place”.

As you move throughout Sydney you might pass through the territories of different groups, but by looking at local signage and doing a little of your own research you can generally establish where you are in Aboriginal Sydney.

What is the Aboriginal name for Sydney?

In truth, there is no specific Aboriginal name that covers the whole of Sydney, but a myriad of names were given to places of significance throughout the area.

Bennelong Point, where the Sydney Opera House now sits, was known as Dubbagullee while Sydney Cove was called Warrane.

Some traditional names have survived into the modern era, though often in heavily modified forms, including Woolloomooloo, Coogee and Bondi. Some councils have begun to re-use Aboriginal names, replacing European ones or simply placing them alongside one another, such as Dawes Point (Ta-Ra). A more comprehensive list of Aboriginal place names in Sydney can be found here.

Who are some famous Aboriginal historical figures we should know?

The most well known Aboriginal person of the early colonial period was probably Bennelong. Abducted under the orders of Captain Phillip, Bennelong came to act as a kind of conduit between the colonists and Sydney’s indigenous people, adopting aspects of English culture and encouraging other Aboriginal people to do the same, albeit with little success.

Bennelong is today closely associated with the place where he lived, now called Bennelong Point, and the site of the world-famous Sydney Opera House.

But while Bennelong took a more conciliatory approach to the invaders, Pemulwuy did not, and although long marginalised in the history books he’s recently began to re-enter the public imagination as one of the first great leaders of the Aboriginal resistance to colonisation.

From 1790 til his death in 1802 Pemulwuy lead a guerrilla war against the burgeoning colony at Sydney, that at times seriously threatened its existence. After being killed, his skull taken as a trophy to London, and despite extensive lobbying, it has yet to be returned.

How many Aboriginal people live in Sydney?

According to the 2016 census, just over 70,000 people living in Sydney declared themselves to be Indigenous, making up 1.5% of the population, which is slightly under the national average. The highest concentration of Aboriginal people (4.8%) live in the outer western suburb of Penrith, with similar numbers (4.5%) in the south-western suburb of Campbelltown.

Aboriginal people have also been prominent in coastal La Perouse almost continuously from before colonisation, but for most of the 20th Century, the real centre of Aboriginal life in Sydney was Redfern.

What is the importance of Redfern to the Aboriginal community?

As Sydney industrialised, and particularly in the post-war periods, Redfern became a hub for Aboriginal internal migrants, coming from rural areas to work in the factories, railways and shipyards of the inner city.

Inspired by the developments in the United States to a very similar marginalisation, Australia’s very own Black Power movement began in the 1970s and was largely centred on Redfern. Institutions like Aboriginal legal services, health services, housing collectives and theatres were formed, many of which were the first of their kind. Redfern came to be compared to a kind of Sydney Harlem.

By the 1980s however, things had taken a turn for the worse. Deindustrialisation was leading to increasing unemployment and social ills such as crime and drug abuse began to rise, and Redfern gained a national reputation for violence and poverty. In 2004 riots flared up in Redfern after the death of Aboriginal teenager fleeing from police.

Using law and order as a justification, the government worked with property developers in an urban renewal project designed to gentrify Redfern, at the time surrounded by some of the most valuable real estate in the country.

Fifteen years later, and that process is all but complete, with the Aboriginal population of the mostly pushed out. In many ways, Redfern is now indistinguishable from the rich and trendy suburbs that surround it, with only the vestiges of its cultural heyday. Redfern, however, retains its status as a cultural centre with many important sights and experiences to be beheld. Find out more about Redfern here

Related: Check out our favourite Aboriginal Tours and Experiences in Sydney

What are some Aboriginal cultural events I can attend in Sydney?

There are several Aboriginal cultural events that are held throughout the year and are open to the public, and attending a few of these is a great way to better understand both Aboriginal Australia and the city as a whole.

NAIDOC stands for “National Aboriginal and Islanders Day Observance Committee” but this celebration of Aboriginal history, culture and achievement usually runs for the whole week starting on the first Sunday of July. A wide range of events occur in Sydney every year during NAIDOC week and can be viewed here

Another key celebration is the Invasion Day commemoration is held on January the 26th, a time many Australians consider their national day. But for many Aboriginal people and their supporters, the 26th marks the beginning of the British invasion.

While many of the events held on this day are more solemn in nature, one of the most important events on Invasion Day in Sydney is the Yabun Festival, a family-friendly music and cultural day held every year in Victoria Park.

Places in Sydney to learn more about Aboriginal Culture.

Learn about the heritage of the land and original peoples of Sydney in these tours offered by the Aboriginal Education Officers at the Royal Botanic Gardens on Sydney Harbour. The tours explore plant use, culture, artefacts and explore the Cadi Jam Ora: First Encounters Garden.

There is usually the opportunity to taste some of the bush foods too. Tours are held on Wednesdays, Fridays and Saturdays, and bookings are essential (Ph. 9231 8134). Learn more on the Royal Botanic Gardens website.

The Australian Museum houses an extensive collection of Aboriginal artefacts and images.  Along with the collection, they host two free, 1-hour  shows (after museum entry) every Wednesday.

If time permits and you can head a little further from town and visit one of these spots.

You can easily access the aboriginal rock engraving site at Bundeena by public transport.

Alternatively, join the Aboriginal Heritage Officer from the Royal National Park on an easy walking tour to explore the engravings and learn about the culture of the local Aboriginal people. Phone: (612) 9542 0649 for more details and to check dates for tours.

Take a visit to La Perouse

If you want to learn more before you visit, this website by the Sydney City Council called Barani: Indigenous History of Sydney City is a great starting point.

3 thoughts on “Learn More About Aboriginal Culture in Sydney”