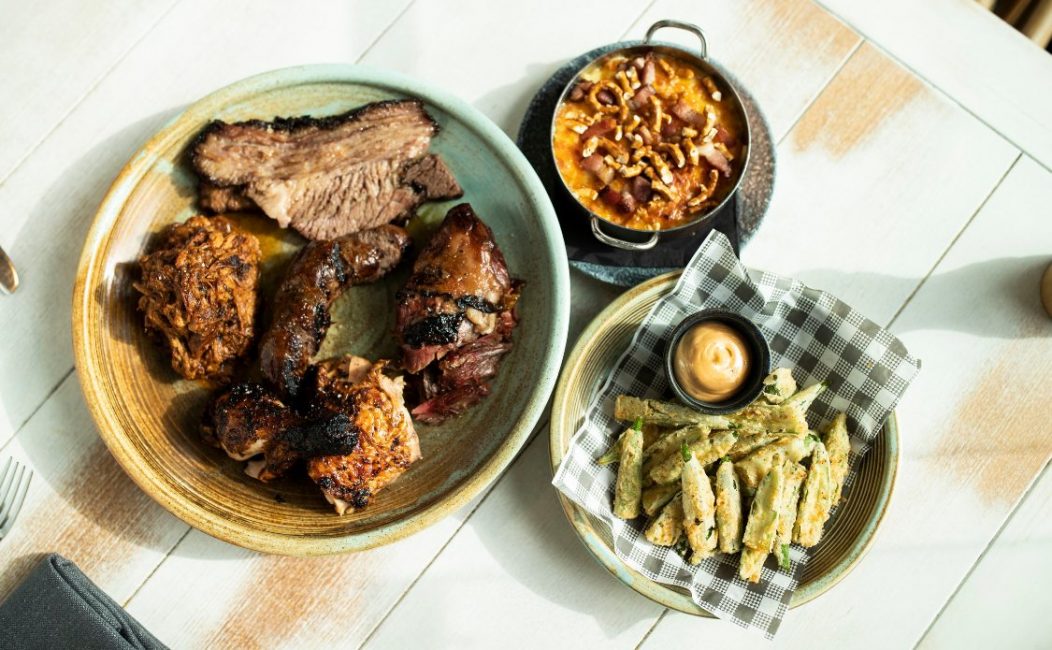 There isn’t much better than the smell of some low and slow style barbecued meats, with smoke billowing out the top of a smoker. If you are also a fan of American style BBQ, here are some of the best places you can pick up a pulled pork burger or a brisket box in Sydney.

Hayley pulled together the following list based on the best BBQ joints she has found around Sydney over the last few years searching for Sydney’s best eats while documenting them on her foodie Instagram account, @thesydneyfoodhunt! With American style BBQ being one of my all-time favourite feeds, you can trust me when I say the following BBQ joints are some of the best Sydney offers!

Where to find the best American BBQ in Sydney

In no particular order, these are my favourite places to feast on some American BBQ in Sydney!

The team at BlackBear BBQ have developed a bit of a cult following over the years, after establishing an impressive total of three locations across Sydney, all while travelling to different markets and festivals in their food truck to put happy faces and full bellies on as many Sydneysiders as possible!

They have developed from being a couple of mates cooking up meat on a backyard smoker for fun, to now being a widely popular establishment with not only restaurant meals, but having their own butcher shop selling the finest quality cuts, and holding their own BBQ masterclasses – so you can trust they know what they’re doing!

Must try: The Hungry Bear Box (Taste little bit of everything they have on offer!) or at breakfast add the Brisket beans to your order.

Where: Barbeque restaurants in Vineyard, Blacktown, Wetherill Park and at events and festivals

Smoky Sue’s is a relatively new kid on the block, and with two locations, they are definitely standing their ground! Smoky Sue’s mantra is “barbecue done different,” and we certainly aren’t complaining! Whatever they are doing, they certainly need to keep doing it!

A post shared by THE SYDNEY FOOD HUNT (@thesydneyfoodhunt)

Pictured below is the ‘Ribby McRib Face Burger,’ and the picture really speaks for itself! This $34 burger is their iconic beef short rib burger with slaw, pickles, cheese and BBQ sauce! The best part (other than eating it, of course) is that the burger still comes with the rib bone inside, so you have to do the rib pull yourself! (Check out my Instagram for my attempt at it!). They also do delicious sweet potato fries.

Must try: The Ribby McRib Face Burger, their range of fresh sodas!

The guys at 2 Smokin’ Arabs run an ever so successful food truck which travels around Sydney.  They have some pretty unique, tasty flavours that you won’t find at any of the other BBQ joints, which is what makes them so special.

2 Smokin’ Arabs also strictly barbecue with only 100% wagyu 9+, which is a rarity in the BBQ game, so by hitting up their food truck, you know you are getting the best quality! All the meat served is halal.

Must try: The TRUFF Burger with Wagyu 9+ patty and American jack cheese

Where: Primarily based in Punchbowl, but food truck travels! Check their Facebook for the latest news.

If you are looking for something a bit closer to the Sydney CBD, and that has the fit out to match the food – it’s Surly’s that you are going to want to try for classic American cuisine.

Surly’s is ‌in Surry Hills and is constantly busy, with people from all over Sydney, and travellers alike, coming to try their low and slow style American BBQ, accompanied by their traditional American sides.

Surly’s currently has an All You Can Eat American BBQ deal, where for just $50 you can sit with your friends and devour as much beef brisket, pulled pork, smoked chicken thighs, hot link sausage and chicken wings as your heart desires! Don’t forget that all the southern essentials like fries, slaw, onions, pickles and cornbread are included too!

This is a BBQ joint where they really live up to their name! Smokin’ Hot and Saucy have teamed up with Penrith local brewing company Rusty Penny Brewing Co, and opened a beer and BBQ lover’s delight!

A post shared by THE SYDNEY FOOD HUNT (@thesydneyfoodhunt)

Located inside Rusty Penny’s brewing warehouse, you can truly be transported to the heart of Texas, with American football and basketball on the big screen, craft beer in hand, and a hearty plates of American BBQ deliciousness on the way. Buffalo wings and local boutique beers, anyone?

Make sure you don’t leave without purchasing a bottle of one of their signature sauces to take home!

Must try: The Smoked Chicken Pieces, the Raspberry Sweet and Spicy Texan Jam (with the pulled pork!)

Located inside Castle Hill’s popular pub – The Hillside Hotel, you are guaranteed to have a great time with a night spent at Fire and Brimstone!

These guys have really upped their BBQ game, offering a variety of different ways to enjoy their smoked meats. On Friday and Saturday nights, you can enjoy Bottomless Beer and BBQ for 2  hours for just $79pp.

If you are feeling a little bit fancy, you can attend one of their ‘Glenlivet 5 Course Pairing Dinners’, which involves a variety of courses including pulled pork sliders, beef brisket, lamb shoulder and more – each paired with a Glenlivet bourbon!

Must try: Chicken Maryland or the Smashed Cheeseburger!

Smokin’ Als is a Halal BBQ joint based in Rockdale that does the absolute lot! They’re serving up  smoked meats, burgers, hot dogs, wings, tenders, loaded fries and all the sides you can think of!

If you have room after your meaty meal, Smokin’ Als serves up some delicious desserts as well! You can choose from a giant choc chip cookie, a loaded brownie, a hot cinnamon Hershey’s  donut (very American) – or a try a little bit of each!

Must try: Everything mentioned above, plus the Smoked Corn on the Cob with chipotle mayo butter, smokey salt and Grana Padana cheese!

NOLA isn’t quite like all the other BBQ joints on this list, they have taken American BBQ, and fine dining – and mashed them together to create the wonderful NOLA Smokehouse in the heart of Sydney, at Barangaroo.

NOLA stands for New Orleans, Louisiana – and it’s not just the name that this restaurant has taken inspiration from the southern state for! NOLA aims to bring its visitors a true taste of the heart of soul that New Orleans Louisiana flavours offer.

NOLA offers a contemporary approach to BBQ, includes the soul food staples, while offering a wide selection of American whiskeys to pair, to create an authentic American smokehouse feel. So, if you really feel like some delicious BBQ, but also feel like dressing up and going to the city – NOLA is your best friend!

American BBQ has gotten quite popular with Sydney-siders, and this is not an exhaustive list! Let us know your favourite BBQ joints in the comments below!

About the author: Western Sydney based creator, Hayley Tighe, runs The Sydney Food Hunt and aims to source and highlight the best food and drink across Greater Sydney to share with other Sydneysiders and visitors on Instagram.