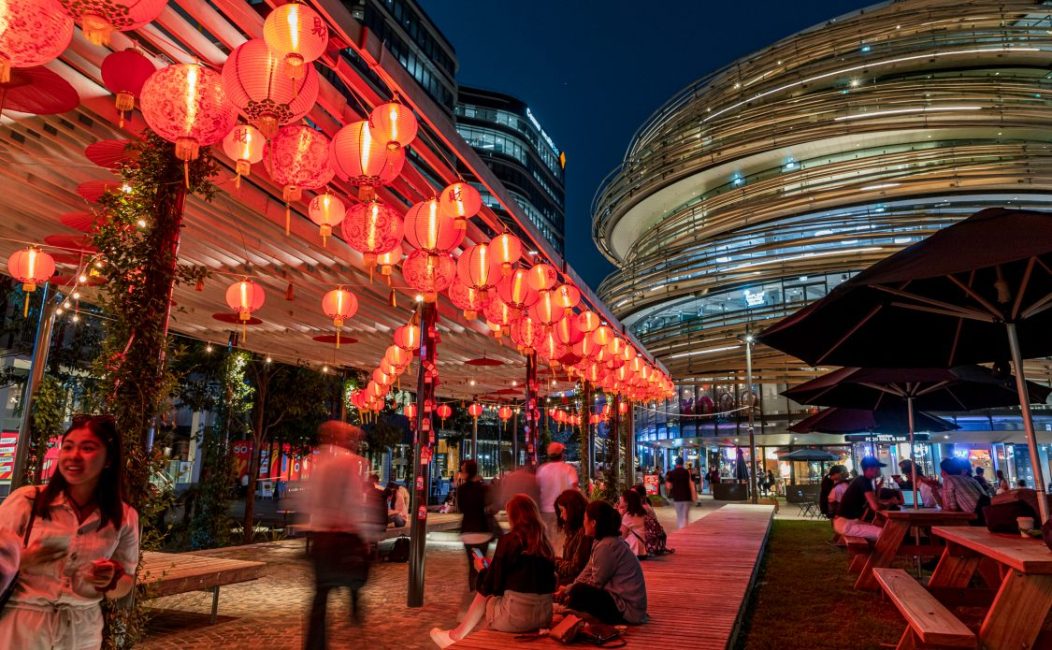 February sees the last month of summer and with the kids heading back to school, life is getting back to normal after the Christmas/school holiday period. Prices and availability of accommodation usually improve although World Pride this year has pushed price much higher than normal.

Weatherwise this month is one of the most humid of the summer. The warm temperatures make this a great time to explore some of the 100 plus beaches within the Sydney region.

You may also notice plenty of lanterns in the streets in honour of the Lunar New Year.

New events and updated content are added to these pages as they become available.

Annual Events in Sydney in February

February is all about love! With Valentine’s Day and World Pride filling the street with happiness.

This year Sydney Gay and Lesbian Mardi Gras Festival is bigger than ever when Sydney hosts World Pride. This year the festival will take place from 17 February to 5 March 2023 with the parade returning to Oxford Street on Sat Feb 25 from 6pm

Over 16 days and nights, the city will host a variety of events, from talks and exhibitions to parties and, of course, the Parade.

Among the key events:

The last event of the Mardi Gras Festival, the parade features over 8,500 participants in outrageous costumes and an enormous variety of floats. Each float represents a community group, topical theme or political message to help raise wider awareness of issues important to the LGBTI community The after party is sold out!

Where: Oxford Street
When: 25 February

Start the month with this fun 24hr arts and culture festival that will take place on Macquarie Street East on the first weekend in February.

Main activation sites for the festival are the State Library, Hyde Park Barracks, The Mint, Sydney Hospital and the Domain. Many free events and some ticketed shows are going on sale 18 January.

One of Macquarie’s street’s less known sites, The Mint will become a native garden light by black light in the evening to showcase the photo-luminescence of its flowers. Literally glowing in the dark, this installation of flower sculptures can be viewed late into the night. Listen to classical music, meet the floral artists and enjoy the spectacle.

Will Huxley and Garrett Huxley (Yorta Yorta/Gumbaynggir) are Melbourne-based collaborative performance and visual artists. The Huxleys are a dynamic duo of cataclysmic proportions who present camp commentary and spectacle across the visual art, performance and entertainment sectors.

Their photography and performance art traverses the classifications of costume, film and recording. A visual assault of sparkle, surrealism and the absurd, The Huxleys saturate their practice and projects with a glamorous, androgynous freedom which sets out to bring some escapism and magic to everyday life.

Whitworth’s renowned portraiture is showcased in a bold and colourful exhibition. This is a showcase for his newer neo-classical, abstract landscapes. Whitworth’s eighth solo show in Sydney has drawn enthusiastic crowds along with Media and buyer praise.

The Museum of Sydney celebrates NSW’s First Nations weaving traditions in the Weaving Room. Drop-in to join workshops where you can hear from Elders and artists, create a piece to take home, and make a special connection to First Nations culture.

Since opening in 2009, the White Rabbit Gallery has bought us some of the most significant exhibitions of Chinese contemporary art on offer. The current show is no exception.

“The artists in ‘Shuo Shu’ map the evolution of the story from timeless myths and literary romances to political propaganda and modern-day censorship. Artists become shapeshifters, and their stories twist and turn to fit within codes and secret messages. Whilst a closed mind is like a closed book, stories reveal themselves to those who are open.”

Art in the Park – Barangaroo

Participants will also learn about the cultural significance of creating art and telling stories through methods other than just speaking. Paint and canvases will be supplied and you’ll be able to take your masterpieces home with you.

Register here to attend one of the workshop at dates listed below (from 1-2pm):

There are three Opera’s on offer this month from Puccini’s Turandot to La Boheme and Don Giovani.

Experience the world’s most famous aria, ‘Nessun Dorma’ at the Sydney Opera House

Puccini’s Turandot is is perfect for lovers of Ballet who have yet to cross over to the Opera experience. In this exotic fairytale discover if Will our brave suitor will melt the icy princess’ heart. Turandot is a fantasy of poetry and myth set in a world where love and death go hand in hand.

Four stories. Four emerging storytellers. For the future. After a ten-year hiatus, Dance Clan returns to Bangarra Dance Theatre in 2023, presented at Bangarra’s own studio in Walsh Bay.

Dance Clan fosters the talents of a new generation of storytellers, designers, dancers, and choreographers – offering the unique opportunity for Bangarra’s artists to share their own stories alongside a brilliant team of Indigenous early career designers with the support of elders and mentors.

Bell Shakespeare presents a new production of Macbeth, in celebration of the 400th anniversary of Shakespeare’s First

“Directed by Artistic Director Peter Evans, the production is a terrifying portrayal of moral collapse and an intense and compelling journey into the dark heart of humanity. Shakespeare’s most haunting thriller follows the story of Macbeth, a Scottish general, famed for his exploits on the battlefield.”

Where: Lyric Theatre
When: Tickets on sale through to 27 Feb
Cost: from $70

Rocky Horror celebrates its 50th anniversary this year and the Aussie cast of the 2023 production will feature starring Australian superstar Jason Donovan as Frank N Furter and Myf Warhurst as the Narrator.

Choir Boy is a Tony Award® nominated play – threaded throughout with soul-stirring acappella gospel hymns. It is a moving story of sexuality, race, hope, gospel music, and a young gay man finding his voice.

Choir Boy is a part of Sydney World Pride 2023

Where: Riverside Theatres in Parramatta
When: 14 February – 11 March, 2023
More: https://riversideparramatta.com.au/NTofP/

World Pride at the Seymour Centre

To begin the festivities, Siren Theatre Co and the Seymour present the world premiere of CAMP, playing 15th February to 4th March and supported by the NSW Government, City of Sydney, Star Observer, LOTL, and Qtopia.

On the 18th February, the Seymour presents All Out Comedy, a spectacular night of stand-up featuring full sets from two of Australia’s leading comedians, Geraldine Hickey (What A Surprise) and Nath Valvo (I’m Happy For You), hosted by the extraordinary Coco Jumbo (RuPaul’s Drag Race Down Under S1).

From the 18th to 23rd February, one of Australia’ greatest storytellers, William Yang (Friends of Dorothy), explores the vibrant history of Mardi Gras and the heady and turbulent scenes of 1970s Sydney and beyond, in his new work, Gay Sydney: A Memoir, supported by the NSW Government.

Finally, to round out the Seymour’s WorldPride celebrations, Dan Daw (Beast) returns to Sydney to bring audiences the highly anticipated Australian premiere of his critically acclaimed show, The Dan Daw Show, included in The UK Guardian’s top five dance shows of 2022.

‘Daddy’ is a new one man show that is a combination of stand-up and character-based comedy. Strap yourself in: you’re about to meet Father Liberace O’Toole, Craig Faggot and even “Mosman housewife and self-funded retiree” Deirdre Flick – as Brent Thorpe takes you on a wild ride, discovering what life is like as a Daddy… and how much fun getting older really is!

Tickets are selling fast for this popular summer series with performances from some of Australia’s much loved artists including Kate Miller Heidke, Daryl Braithwaite, Kasey Chambers and the Living End. This year there is also a fabulous drag show and comedy gala.

Summer is outdoor cinema season in Sydney but the Moonlight Cinema is one of the classics. A good mix of new releases and golden oldies. BYO drinks make this spot a standout.

When: All February
Where: Belvedere Amphitheatre, Centennial Park

All of Sydney’s Outdoor Cinemas are still on sale and are perfect for summer viewing!

SailGP returns to Sydney Harbour in February for its fourth visit. Watch the world’s top sailors battle it out at the KPMG Australia Sail Grand Prix. Cheer on the Australia Team, helmed by Olympic sailor Tom Slingsby, as they defend their championship title in their homeland.

Barangaroo is the hub of SailGP Village, where you will find plenty of off water action. Join in the free activities and entertainment. You will also find the team bases and view the world’s fastest racing boats. Tours will run from 16 February book tickets asap as they are expected to sell out.

Where: Sydney Harbour – Barangaroo is the base
When: 18-19 February
Cost: Many activities are free although there are some ticketed spectator cruises

Keen to catch all the Superbowl action in real time? Head to Watsons at EQ. A mega screen in the courtyard, fried chicken and loaded hot dogs and even Budweiser beer. Doors open at 10am and the game starts at 10:30am. Table bookings recommended.

Where: Watson’s EQ
When: 13 February
Cost: Meal and beer deals from $20
More: For further info and to book a table on the deck visit www.watsonseq.com.au