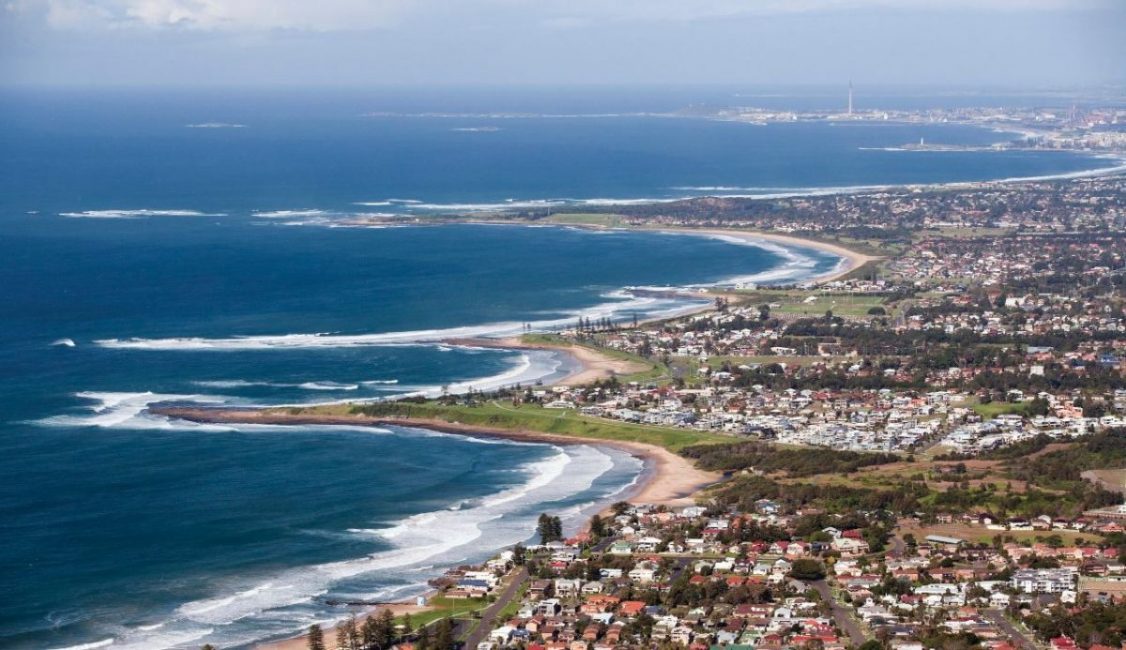 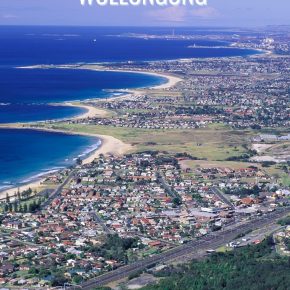 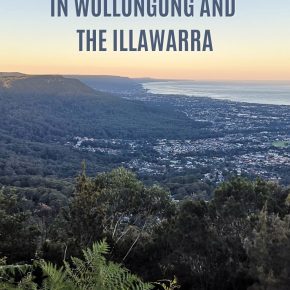 9 Stunning Walks in Wollongong and the Illawarra

These walks in Wollongong offer extraordinary views and lush green landscapes, and best of all, they attract far fewer crowds than any Blue Mountains walks or the Royal National Park Coast Walk. Why not discover the track less travelled next time you fancy a day of bushwalking?

With pristine beaches, dense forests, rugged cliffs, and pleasant suburbs, there are many great walking tracks in Wollongong to choose from. So if you’re curious to know about the best Wollongong walks, read on for some of the highlights.

The large and cosmopolitan city of Wollongong is located just an hour’s drive south of Sydney. Squeezed into a long narrow strip of land between the Illawarra Escarpment’s towering cliffs and the shimmering blue Pacific Ocean, the Wollongong area is a fantastic place to go hiking.

Located at Stanwell Park in the far northern suburbs of Wollongong, the Wodi Wodi Track is one of Wollongong’s best hikes.

Named for the Wodi Wodi people, the traditional indigenous owners of the area, this six-kilometre, half-day return walking trail showcases everything that’s great about the Illawarra. Starting directly from Stanwell Park train station, the trail plunges immediately into dense forest, with a towering tree canopy and thickly packed vegetation.

Eventually, the track crosses Stanwell Creek (typically but not always dry) before sharply descending the escarpment’s cliffs. There are spectacular views across the local area, with endless blue water peeking out from behind the trees.

After a long descent, the track finally arrives at Coalcliff train station. The return journey is quite a bit tougher, with lots of climbing, but you’ve also got the option of returning via Lawrence Hargrave Drive or just catching the train (though services can be quite infrequent, particularly on weekends).

Tip: As with many Wollongong hikes, the trail can get quite muddy after rain, so use your best judgement.

Distance: 6km
Difficulty: The walk is steep in parts, and there is some erosion on the track, so it’s best suited to those of average fitness and above and requires good footwear.
Where: Start at Stanwell Park train station.
See the Google Map location

Towering over central Wollongong at 464 metres, Mount Keira is one of the area’s most prominent features. The summit’s panoramic views are expansive and impressive, with the entire coastline stretching out below you.

To fully explore both the area and summit of Mount Keira, it’s best to take the Mount Keira Ring Track, easily one of Wollongong’s best walks.

Starting from the Byarong Road picnic area (just near the Girl Guide campground), the Mount Keira Ring Track circles the summit in a four-kilometre loop, passing through patches of rainforest, temperate forest, bushland, and of course, the cliffs of the Illawarra Escarpment.

There’s some steeper up and down sections and a couple of staircases as well, so be sure to watch your footing! If you’re keen on heading to the summit of Mount Keira itself, you’ll need to take a side path, following the Dave Walsh Track up to the top, where there’s a cafe, public toilets, and spectacular views back across the city of Wollongong.

Tip: Be wary of attempting the track on rainy days, as leeches abound in the damp rainforest, and the track tends to get very muddy.

Distance: 5.5km
Difficulty: The NSW NPWS rate this as a grade 4 walk- there are many stairs and some steep sections.
Where: Byarong Park, Mount Keira Road, Mount Keira
See the Google Map location

Located a bit further south is the impressive Mount Kembla, standing at 534 metres and dominating the landscape of the southern Illawarra escarpment. With fewer visitors than nearby Mount Keira, the climb up to Mount Kembla is a great way to enjoy the rainforests, bushlands, cliffs, and lookouts of the escarpment without any of the crowds.

The track itself runs for about 3.5 kilometres out and back, though don’t let the short distance deceive you! There are about 250 metres of elevation gain on the climb up, and as any hiker can tell you: the 250 metres going down can be just as painful as the climb.

Starting from the car park on Cordeaux Road, the trail heads through thick bushland, mossy rocks, and casuarina forest before finally emerging at the summit lookout. With Wollongong, Lake Illawarra, and the mighty Port Kembla steelworks stretching away on the plain below you, rest up and enjoy the view before heading back down. Be sure to stick to the trail, as nearby cliffs are very steep (and can be slippery).

Tip: The summit track is also renowned for colourful mushrooms and fungi, thanks to the frequent misty conditions, so keep an eye out. However, none of them are edible, so it’s best to observe from a distance.

Distance: 3.5km
Difficulty: The NSW NPWS rate this as a grade 4 walk- there are lots of stairs and some steep sections.
Where: Byarong Park, Mount Keira Road, Mount Keira
See the Google Map location

One of the best short walks in Wollongong is the well-known Sublime Point walk, running between Austinmer and the iconic lookout at Sublime Point.

One of the most challenging and rewarding walks in the area, the Sublime Point Track is just 1.2 kilometres in each direction but involves over 300 metres of elevation gain.

Featuring steep paths, rock staircases, and even some narrow ladders high on the cliffs, the Sublime Point track isn’t for the faint-hearted! The climb can take anywhere from 20 minutes to two hours, depending on fitness, but it’s definitely worth it.

The lower sections of the track run through the damp rainforests, with plenty of cabbage tree palms and ferns. As you climb up and up, you’ll see more of the cliffs and the surrounding area, before finally emerging at Sublime Point, one of the finest lookouts in the Wollongong area.

Rest up at the Sublime Point Cafe, enjoy the view, and snap a few selfies before carefully making your way back down.

Tip: Although the Sublime Point Lookout walk starts and finishes on Foothills Road in Austinmer, you’ve also got the option of taking the Gibson Trackside path on the return journey, which runs for another kilometre through the rainforest before terminating at Phillip Street in nearby Thirroul.

Distance: Less than 1km
Difficulty: The NSW NPWS rate this as a grade 4 walk- because of the stairs/ ladder and steep sections.
Where: Foothills Road Austinmer
See the Google Map location

Showcasing the best of the Wollongong area, with its rainforests, bushland, cliffs, wildlife, and spectacular lookouts, hiking the Illawarra Escarpment walk is a must for any serious bushwalker.

The trail begins at Stanwell Park railway station and heads immediately up into the rugged bushland underneath the cliffs. After several kilometres of steep uphill sections, the track finally reaches the plateau atop the escarpment and naturally flattens out.

It’s a wonderful trail to follow, meandering through patches of forest, bushland, and a couple of swamps, and with constant glimpses of the spectacular coastline below.

Eventually, the Escarpment Walk arrives at Sublime Point, one of Wollongong’s best lookouts, and proceeds sharply down the cliffs, following the Sublime Point track listed above. It’s a long and tiring day walk, but one that’s definitely well worth doing!

Tip: You can do this walk in stages by completing the Wodi Wodi Walk, the Sublime Point walk and

A bit further south of Wollongong is where you’ll find the excellent and relaxing Illawarra Lookout Track. Starting from the Barren Grounds picnic area, this easy walk is just two kilometres return and features fairly minimal elevation changes. It only takes an hour or so to complete the entire walk, but it’s still packed with fantastic stuff to see.

The trail winds through forests and patches of heath before emerging on a rock platform known as Illawarra Lookout.

From here, you’ve got spectacular views of the southern Illawarra and Shoalhaven areas, with rolling farmland, small towns, and of course, the magnificent coastline in the distance.

Be sure to keep your eyes peeled for wildlife, as it’s an important breeding area for many species, and there are plenty of native birds around as well.

Tip: Don’t forget your sunscreen and hat – many parts of the track can be quite exposed.

Distance: 2km
Difficulty: Grade 3 – Quite flat with some stairs, suitable for most.
Where: Barren Grounds picnic area
See the Google Map location

If you’re not a fan of heights or climbing steep cliffs, there’s plenty of excellent Wollongong walks for you as well. One of the best is the Wollongong Coastal Walk, an epic 60-kilometre trail that runs from Bundeena at Sydney’s southern fringe, along the coast into Wollongong.

But for an easier option, it’s best to tackle the Coalcliff to Thirroul section of the walk, which takes in most of the highlights. Starting from Coalcliff Station, follow the Sydney-Wollongong Cycleway southwards, which follows pretty closely to Lawrence Hargrave Drive.

You’ll cross the iconic Sea Cliff Bridge, a graceful curving bridge over the ocean that’s starred in countless car commercials. Heading further south, enjoy the beachside communities of Scarborough, Clifton, Wombarra, Coledale, and Austinmer before arriving in Thirroul. There are plenty of beaches, cafes, and picnic areas dotted along the 11-kilometre route, so take as much time as you like.

The gorgeous Bass Point Reserve occupies a long, thin ocean peninsula in the Shellharbour area, just south of Wollongong. There are several great opportunities for short walks in the Reserve, but the best is definitely the Bass Point Coastal Walk. It’s about five kilometres return, starting from the Red Sands Beach parking lot on Bass Point Tourist Road.

The trail heads east along the peninsula, staying close to the rock pools and waves, while scrub and bushlands loom above you on the right-hand side. Follow the path through this beautiful environment, reading the interpretative signs on the local indigenous culture, and enjoying the views as you reach the tip of Bass Point.

Tip: Be sure to head south along the track for excellent views of Bushranger’s Bay, with its superb snorkelling and marvellous lookout!

If you’re someone who prefers walking in rainforests rather than underneath cliffs or along coasts, the Minnamurra Rainforest Walk is a great option.

Starting from the Minnamurra Rainforest Centre in Budderoo National Park, the rainforest walk is a 1.6-kilometre loop that’s mostly flat and ideal for kids. Tramp across suspension bridges, marvel at the towering canopy, listen to native bird calls and enjoy the lookout views along the way.

If you’re feeling a bit fitter, The Falls Walk side trail is a 4.2 kilometre optional extra, which meanders up through the rainforest to spectacular Minnamurra Falls. Overall, it’s one of the best walks in Wollongong and makes for a perfect family day out.

Tip: Unlike many national parks in the region, there’s a $12 per vehicle charge to access the Minnamurra Rainforest area, but it’s definitely worth it!

Want more ideas for walking in Sydney and beyond? Join the Sydney Expert Facebook Group