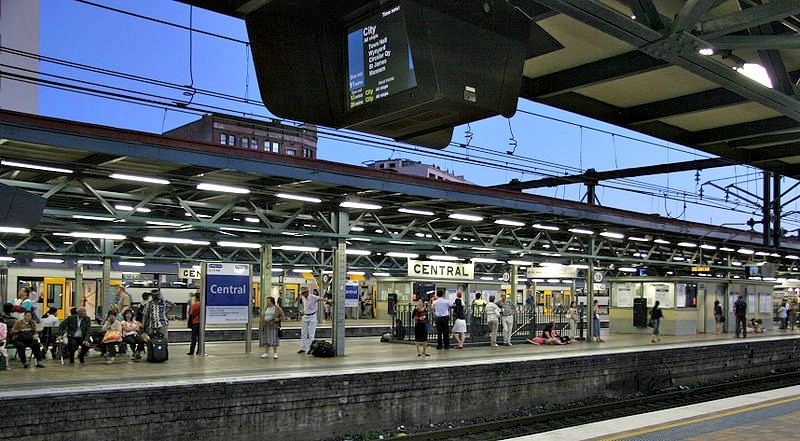 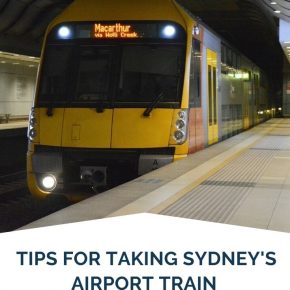 Taking the Sydney Airport train to the centre of the city is a good option for most visitors and one of the quickest ways to get to the CBD. Solo travellers and couples will find the airport train cheaper than a taxi, and it is a pretty straightforward trip if you are staying in the middle of town.

While living in Mascot for a few years, I caught this train daily. Over time, I noticed travellers struggle with their bags and, in peak hours, the crowded carriages. I decided to write up a few observations to help you have the smoothest airport transfer you possibly can.

How to find the Sydney Airport Train Stations

Don’t worry too much about this on arrival in Sydney; the terminal stations are well signposted and easy to find.

Trains to the city take about 15 minutes and run about every 10-15 minutes for most of the day.

If you are heading to the airport from the city make sure you get off at the right station, do not get off the train at the Mascot suburban station. Alighting here is such a common mistake there are now signs on the station pointing out it is not an airport station.

If you have not already worked out the ticketing system head over and read the Opal card article that covers the most frequently asked questions about Opal Cards for Visitors.

Here are my three tips for making your Sydney airport train journey a success!

Choose your carriage depending on where you plan to get off

After the airport, the first two stations as the train heads into the city are jam-packed during peak hours.  Between 7.30-9am hundreds of commuters pour into the train at both Mascot suburban and Green Square stations.

The area is also home to lots of corporate offices, so before commuters pour in, lots of passengers are already on the train alight.  Try not to be in the doorway while all this is going on.

The exits for both stations are in the middle of the train, so if you don’t need to get off here, avoiding these middle carriages is a good idea. There is almost always much, more room at the front and the rear of this train.

Once the train reaches Central Station, it travels around the city via a loop known as the City Circle.

If you are getting off the train at Central the front of the train is the best place to ride. The only lift at Central is at the city end (front) of the platform.

If you have large bags, I recommend taking the elevator as commuters running late for work or changing trains rush down these stairs.

If you are getting off at St James, the exits are in the middle of the platform, and the lift is hidden behind the stairs between the two platforms. Once you get to St James, the train empties; this means you will likely have plenty of room if you are continuing.

The next stop is Circular Quay – if this is your first time in Sydney get ready for a great view of the Harbour Bridge from the right-hand side of the train. There are exits here at both ends of the platform and lifts in the middle.

Wynyard Station is reasonably easy to navigate. There are three sets of stairs with lifts toward each end of the platform. Alight here for Barangaroo and King St Wharf.

This station is also home to the wooden escalator sculpture!

You will find this work of art near the exit to York Street Exit. It’s worth popping in for a look when you are in the area.

Town Hall is the last city station in the city circle before this train heads out west. If you don’t have heavy bags, it is worth getting off at Central and changing trains rather than riding the full loop. Town Hall is just one stop away on other lines, and this could save you up to 10 mins.

Town Hall is the closest stop to the Queen Victoria Building, Darling Harbour and the Hilton Hotel.

Move as far inside the carriage as you can

It’s common for travellers on unfamiliar trains to stand close to the exit as they are not sure when they will have to get off. You worry about having enough time to reach the door.  I understand as I have done this too and it’s okay outside of peak times but on this train by the time you reach Central, particularly in the morning, half the train will be getting off too so resist the temptation to block the entry and move inside the carriage as far as you can.

If you don’t have big suitcases, please consider heading up or downstairs. Luggage blocking the entry makes it tough for people at Mascot and Green Square to get on the train.  If you need to get off and there is not a lot of room speak up, and you will find people will move for you.

Lots of visitors are confused about using Opal cards. For the record, you can now buy your Opal card from the International and Domestic terminal train stations however they have recently introduced a minimum $35 top-up for adult cards. There is no minimum for children.

If you don’t think you will use this much credit you can still buy a single ticket from the ticket machines and windows and you can also use your credit card or PayPass on your phone. If you are travelling to the city and using the ferries or buses while are you here, it is likely you will use this $35 over a few days.

There are five newsagents and convenience stores in the airport terminals that also sell the cards.  They usually have a  flag outside advertising this.

The airport stations are privately owned, so the cost of a trip to the city has a $14.30 gate access fee added to the standard fare. If you are planning return travel to the airport, it is worth getting an opal here.

When should you avoid the Sydney Airport Train?

The roads around Sydney airport are ridiculously busy. Traffic is gridlocked most mornings with weekends seeming to see the worst of it.  While the train might seem like a hassle to some of you, especially if you are not regular public transport users it is, in my opinion, less of a hassle than being stuck in slow-moving traffic watching the meter on your taxi tick away or wondering if you will make your check-in on time.

Unless you are staying at a hotel that is not within walking distance to one of the train stations above I prefer to take the train. The only time I would not recommend this is when you are travelling with small children, people with mobility problems or when you have more bags than you can comfortably manage.

What time are the first and last trains to the airport?

Not sure the best places to stay in Sydney?  I have made a detailed list of the pros and cons of each part of the city that might help you narrow it down.

Have any questions or advice about taking the airport train? Join our FB community for personal advice.

103 thoughts on “Tips for taking the Sydney Airport Train”